How to Set Up Wireless Network
At Home or Business

If you already have your home wired network setup, then you can add a wireless access point to extend your home or business network with a wireless signal.

A wireless home network has many benefits:

In a wireless network, it doesn't matter if you have DSL or Cable Internet service, a wireless router

Wireless networking devices can operate in one of two modes:

When a wireless device communicates with other computers or devices through an wireless access point, then it is operating in infrastructure mode. This is the mode we will use when we have a wireless router or access point.

When two wireless computers can communicate without a wireless access point (AP), then they are capable of establishing an ad hoc network. You can create a home network using the ad hoc mode and without an access point present.

This mode is not really used much since you can get a wireless access point for a cheap price. But in a rare case where you have two computers with wireless capabilities and no AP, then go for it.

With an ad hoc network you can transfer files and documents between two network computers.

So let's say you don't have a router or access point in the house.

You only have a DSL or Cable modem and it doesn't have the wireless capability. You can connect your computer and share your Internet wirelessly to the other computers in your home. Your computer just became an access point and is taking advantage of Internet Connection Sharing.

In my opinion, with the low cost of home routers today, you will benefit more with a wireless router than using ad hoc configuration. A wireless router (access point) can connect hundreds more network devices than an ad hoc network.

To set up wireless network you need to understand the different wireless standards defined by IEEE. Wireless technology is advancing rapidly, today your home network can reach speeds of over 300 Mbps compared to 54 Mbps a couple of years ago. These wireless standards are:

New routers all come with the 802.11n wireless standard. It has an improved range of signal and faster speeds.

Wondering how your wireless network will look from a glance?

If you already have a home wired network, then you can add a wireless access point to set up wireless network.

Here's a picture of the set up using a wireless access point in your home wireless network: 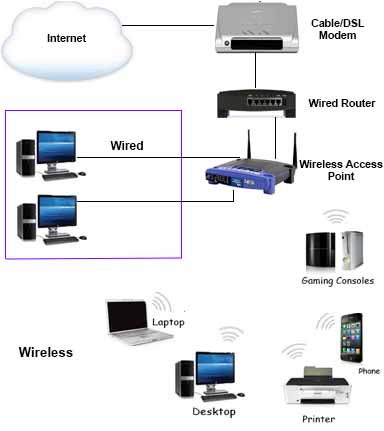 If you only have a DSL or a Cable modem and want to add your own home wireless router then it should look like this.....

Most of the time your Internet Service Provider (ISP) will provide you with a built-in DSL or Cable router. This router eliminates having two devices to configure and allows you to only have one router which connects to your ISP and connects your wireless devices to set up wireless network.

Here's a picture of that setup: 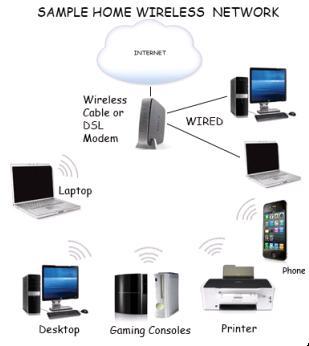 In the previous picture, the wireless router has a built-in 4 port switch. Most home routers have a built-in switch.

You can connect any network device to an available port with an Ethernet cable. You can benefit with faster network speeds when connecting a device with a network cable but the flexibility of going wireless is unmatched.

If you have a lot of computers at home, it can look very ugly if you run cables everywhere. Having a wireless network eliminates that.

You can connect any device with wireless capabilities to your wireless network:

When having a wireless network, won't everyone see my signal?

That is true, they can see your wireless signal if they are in range, but don't worry you can configure your wireless router to use wireless encryption and this will help secure your home network.

I recommend you don't use WEP because it is easy to crack. Instead use WPA version 2 and your home network will be secure from hackers. Quick guide on wireless encryption.

If you are still a little paranoid, then read my article on "Tips for Securing your Wireless Network"

1.) Devices needed for the Wireless Setup